I write often about Islamophobia in America, and while it is a massive and growing problem, it plagues Europe far more.  Let’s uncover why. 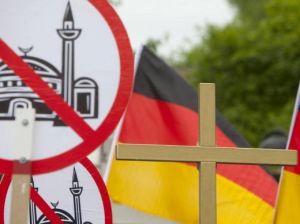 Unlike America, which was founded to embrace diversity, western European states each grew out of a common national identity.  Those living within the borders of a country generally shared a similar history, language, religion, and ethnic heritage.   After WWII, Europe embraced and spoke highly of tolerance, plurality, and freedom of expression, and liberal immigration policies allowed for increased numbers of North Africans, South Asians, and Arabs—many of whom are Muslim—to make Europe home.

The influx of brown-skinned people with unfamiliar customs and thick accents made native Europeans nervous, and the religiosity of these Muslims didn’t seem to fit into the increasing secular landscape of Europe.

In explaining why Muslims in Europe are viewed somewhat differently than those in America, we must look at the religious group’s standing economically. While in America Muslims are generally wealthier and work in professional careers, Muslims in Europe (who make up 4% of the continent’s population) are poorer and more marginalized, living in the more segregated ghettos and suburbs surrounding cities like Paris. In America, Christians see Muslims in respectable professions.  They may go to a Muslim doctor, someone they trust with their life and health.  In Europe, Muslims generally hold lower paying, less desirable jobs, and thus are looked down upon by the majority of society. (Sadly, we might compare the perception and treatment of European Muslims with Latino immigrants in America.)  Muslims in America are generally more ‘integrated’ (I normally don’t like this word) into society than European Muslims, and this clearly plays a role in the higher level of Islamophobia in Europe.

With citizens fearing a loss of national identity as European demographics change, right wing political parties have risen up to address these concerns, capitalizing on fear and promising to bring back Europe from “multiculturalism,” a value that even moderate and mainstream German PM Angela Merkel said has “utterly failed” in Europe.

Parties that once were fringe groups have now begun to win seats in Parliament.  The right wing Netherlands’ Party for Freedom won 15.5% of the vote (and thus make up 15.5% of Parliament) in the 2010 election.  The party’s leader, Geert Wilders, compared the Qur’an to Hilter’s Mein Kampf and has been open about the fact that he “hates Islam”, but “not Muslims.”  Though he didn’t coin the term ‘Eurabia,’ he has used it frequently to describe what he believes Europe will become if Muslim immigration is not adequately challenged.  He no doubt intends it to invoke images of suppressed women, harsh punishments, and a lack of freedom—images Westerners often associate with the Middle East or Saudi Arabia.

The power and influence of these far-right parties has translated into real policy changes in the region.  I’ll focus on one case I’m particularly familiar with—the Swiss minaret ban, which I wrote a term paper about this past spring.

In 2009, Swiss citizens voted in a referendum to ban the construction of minarets (the tall structures often attached to mosques from which the call to pray is traditionally sounded, but is rarely done in non-Muslim majority countries.)  The overwhelming vote was unsurprising given the massive propaganda campaign that was waged by supportive parties and political groups.

At train stations and bus terminals it was common to see this poster (below), which depicts missile-like minarets shooting up out of the Swiss flag and a burqa-clad women with sinister eyes. Many others posters, which showed weapon-like minarets pushing out traditional Swiss landmarks, could also be seen around the country.

Here’s a slideshow of all the posters, both pro-ban and anti-ban.

The politicians’ rhetoric that accompanied these posters was equally disturbing.  Knowing their constituents lacked much contact with Islam and Muslims, the politicians tried to shape their constituents’ views, often providing a distorted and negative portrayal (as is often done in the U.S. as well.) Those opposing the ban, who even included the Prime Minister and ruling party, focused on arguments about the right to religious freedom.  But those arguments, which relied on a critical and calm examination of the facts, could not convince those who were already steeped in fear of Islam.

Since the minaret ban, Islamophobia has become more institutionalized in Europe.  Other countries have proposed minaret bans (Austria, the Netherlands, Italy, and Belgium) and France and Belgium banned Muslims women from wearing the burqa in public and Italy hopes to do the same.  What’s particularly interesting about these campaigns to ban Islamic symbols is that they are addressing small, even insignificant

A niqabi woman outside Notre Dame

issues.  Switzerland only has four minarets nationwide, and few women wear the burqa in European countries.  Just as with the anti-sharia campaign in the U.S., the European movements are creating a large problem out of nothing at all.

As was made apparent by the Swiss minaret referendum, anti-Muslim and anti-immigrant sentiment has seeped into the mainstream, affecting ordinary citizens.  Especially with the rise of the Internet, right-wing extremists can communicate and hate groups can organize more easily than ever.  (Continued after YouTube video.)

(The statistics in the video are highly exaggerated.  This article from the BBC helps to shed light on its inaccuracies.)

In this caustic political and social climate, it’s not surprising that violence and hostility toward immigrants are common, as the AP summarized well: “They beat up black and Arab football fans, terrorize immigrant neighborhoods, smash Muslim and Jewish gravestones, preach hate and rally support online.”  Despite the lack of news coverage, these violent reactions to immigration have been occurring for years.

The Norway terror attacks don’t signal the emergence of a new problem, but rather put a spotlight on an issue that has been simmering on for years and only recently began to boil over. Breivik’s terrorism is only the latest and greatest in this sad trend.

In my next post, I’ll discuss the American personalities who influenced Anders Breivik and what that says about Islamophobia in the U.S.

3 thoughts on “The Oslo Opportunity, Part 2: Fears of an emerging “Eurabia””

Jordan Denari Duffner is a Catholic voice on Muslim-Christian relations and Islamophobia. She is the author of “Finding Jesus among Muslims: How Loving Islam Makes Me a Better Catholic,” which was published in 2017 by Liturgical Press.

An associate at the Bridge Initiative, where she previously worked as a research fellow studying Islamophobia, Jordan is now pursuing a PhD in Theological and Religious Studies at Georgetown University. A former recipient of a Fulbright research grant to study Muslim-Christian relations in Jordan, she has published articles in numerous outlets. Her essay about how Pope Francis speaks about young people is published in the recently released Liturgical Press anthology, A Pope Francis Lexicon.