Today, the New York Landmark Preservation Committee voted unanimously to not grant landmark status to a Manhattan building, the site at which an Islamic and interfaith community center is to be built.  If landmark status had been given to the obscure building, the plans to build the Cordoba House would have been put to a halt (because the new center will demolish the older building to erect its new one).  The request to get this older building landmark status was an attempt by the organization Stop the Islamization of America and others to prevent the center from being built.  It was a futile effort because that building, once a Burlington Coat Factory, had no reason to be considered a landmark. Thankfully, the status was not granted and the building of Cordoba House can continue.

Still, there are many who oppose the creation of the Cordoba House, a center which takes its name from the Spanish city where Jews, Christians, and Muslims lived in peace for hundreds of years.  Despite the fact that the center hopes to foster dialogue, tolerance, and understanding between these groups, many Americans are still fighting it.  Overcome with a fear of Islam perpetuated by cable T.V., organizations like Stop the Islamization of America, and Europe’s recent actions toward Muslims, many people mistakenly believe that this center is a symbol of Muslim conquest.  Some have even claimed that those supporting the center have the same motives as the terrorists who destroyed New York on 9/11.

New York City Mayor Bloomberg today gave a fantastic speech defending the Cordoba House.  He choked up a bit while giving it, and I did while reading.

You should also check out Imam Feisal Abdul Rauf’s op-ed in the Washington Post’s On Faith section. 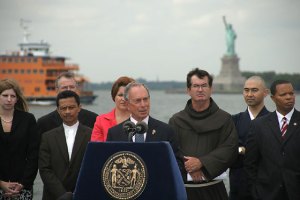 5 thoughts on ““Mayor Bloomberg stands up for mosque””

Jordan Denari Duffner is a Catholic voice on Muslim-Christian relations and Islamophobia. She is the author of “Finding Jesus among Muslims: How Loving Islam Makes Me a Better Catholic,” which was published in 2017 by Liturgical Press.

An associate at the Bridge Initiative, where she previously worked as a research fellow studying Islamophobia, Jordan is now pursuing a PhD in Theological and Religious Studies at Georgetown University. A former recipient of a Fulbright research grant to study Muslim-Christian relations in Jordan, she has published articles in numerous outlets. Her essay about how Pope Francis speaks about young people is published in the recently released Liturgical Press anthology, A Pope Francis Lexicon.