Earlier this week, I published my first piece for Huffington Post Religion. I’m grateful it’s received wide circulation: 4.5 thousand ‘likes’ on Facebook and over 200 shares. Here’s the link to the piece on HuffPost’s website. It is reproduced below.

Why We Need the Islamic Call to Prayer at American Universities

The average college student spends eight to 10 hours a day on a smartphone. Eighty percent of college students report feeling frequently stressed, and one in 10 have been diagnosed with anxiety, depression or other mental disorders. Like the rest of the country, universities are fraught with busyness and competing distractions. Students rush around, faces buried in smart phones and heads cluttered with things to do.

Given this grim reality of college life, it’s too bad the Islamic call to prayer won’t be proclaimed from Duke University’s bell tower. The adhan can be an antidote to some of the challenges college students face.

Since Duke’s decision last week to not broadcast the call to prayer from its chapel steeple — prompted by Islamophobic rhetoric and threats against Duke’s Muslim community — the national discussion around the incident has centered around questions of pluralism and religion in the public space. But what was missed in those debates was the meaning and purpose of the adhan: encouraging deeper mindfulness among those who hear it.

The adhan, like the ringing of church bells, calls us to gratitude, appreciation and attentiveness–things that the modern American university desperately needs. This kind of practice is especially suited to universities with a religious heritage or mission — like Duke or my alma mater, Georgetown — where the balance between rigor and reflection is encouraged, but often hard to strike. Religious and non-religious students alike have much to gain from being called from the chaos of their days to remember the greater purpose and meaning of their lives.

A Catholic in a Muslim land

When I lived abroad in Amman, Jordan during and after college, the adhan was a familiar part of my daily life. Five times a day, the rolling syllables of Allahu akbar — Arabic for “God is greater” — echoed across the city. Chanted from tall minarets and amplified by loud speakers, the adhan bounced off stone buildings and reminded Muslims to pray wherever they were — at home, at work, at school or even at the mall. Sometimes, when I’d visit my local produce shop, I’d find the owner praying outside, his rug unrolled on the sidewalk and his body bowing in humble prostration.

The adhan became something that I, as a Catholic, grew to deeply appreciate and enjoy. Countless times, the words “Come to prayer, Come to well-being,” prompted me to step back from my day and remember what was most important.

I remember one of my first nights in Amman, when I climbed into the backseat of a cab, laden with my heavy backpack and the stress of adjusting to a new city. My mind was full of questions and doubts about whether Amman could ever feel like home. As we sped down the streets of Amman as sunset fell, the adhan came on the radio, and immediately a feeling of calm settled over me. The lyrical words drew me out of my anxiety and calmed my racing mind.

In the months that followed, the adhan continued to remind me to praise and thank God for the blessings of the day, and to ask for God’s help in facing the challenges that would inevitably come my way while living in Jordan. It made me more attentive to the world around me — the beauty of the pink sky at maghrib, the white flowers on the jasmine trees and the kindness of those I met.

A good habit for all

Colleges could benefit from being prompted to mindfulness. Deeper awareness and thankfulness are necessities for today’s campuses, where stress and strain run rampant.

My Muslim friends at Georgetown described to me the benefits of being called to pray, not just once on Fridays, but five times a day. Alerted by their watch, phone alarm or intuition, they’d get up from studying or hanging out with friends to pray. Being called out of their daily activities helped them cope and keep perspective when they were over-worked or concerned about grades.

That’s why the adhan can be good for everyone — even for those who aren’t Muslim, and for those who don’t believe in God. For most people, something is “greater,” whether they choose to call it God or not. The adhan can help us recall what gives our lives meaning, and can help us cultivate an attitude of gratefulness. It can help us look up from the cellphone in our hand and notice the blue sky, the purple shadows stretching across the snow or the smiles of those we pass by.

I don’t anticipate that many universities will choose to adopt the adhan on their campuses anytime soon. But, that doesn’t mean that students and others can’t begin habits that yield the same results. Many campuses have bell towers, which ring on the hour or other specified times of day. At Georgetown, the bells toll in a clang excitedly at noon and six in the evening — a custom reminiscent of earlier times when monasteries rang bells seven times a day to call Christian religious to pray the psalms. For me, and for many students I knew, these bells were an invitation to focus on what’s truly important.

The events at Duke should not only be a spark for discussions about diversity and tolerance. They should also compel us to attend to the things that are akbar — the deeper needs of our soul. 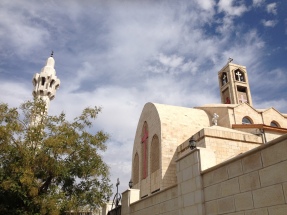 Minaret of the King Abdullah I Mosque and the Coptic Orthodox Church in the Abdali neighborhood of Amman. 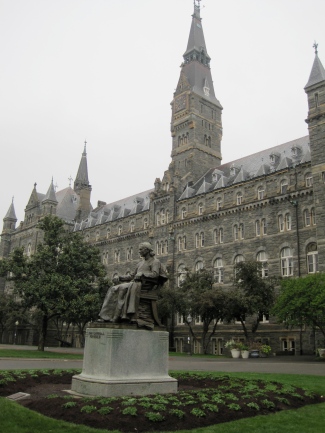 A market in downtown Amman.

Mukawir, the mountain on which John the Baptist was executed, near the Dead Sea in Jordan.